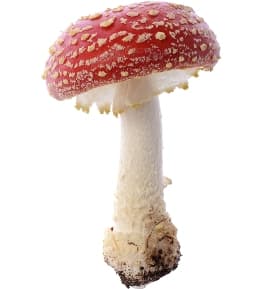 Strange drugs of abuse tell us that people will stop at nothing to get high. But while many of today’s drugs are exceedingly well-known – like cocaine and heroin – there was a time when these substances were new and strange. The following list of strange drugs of abuse comprise a mixed lot of ancient as well as new-fangled substances that people are burning brain cells with. However, like many drugs of abuse these can harm or even kill you, which means that awareness is critical for prevention.

Ayahuasca is a drinkable psychoactive concoction produced using a South American vine and several types of leaves. The process that produces the high is complex, but has been in use since ancient times. While neither the vine nor the leaves are psychoactive of their own accord, when mixed they create a chemical reaction that results in a number of psychotropic properties.

The effects of ayahuasca are profound and reportedly include significant hallucinations, spiritual awakenings, reduction in sense of self, as well as physical effects such as nausea and vomiting. (1)

This drug comes in edible, drinkable or smoke-able form and consists primarily of various parts of the mature female cannabis plant. In some cases herbs, leaves and seeds from other plants – most notably the opium poppy seed – are mixed in bhang in order to produce more dramatic effects in users of the drug.

Bhang has been used by people in India and other parts of the world for centuries, although it is still widely unknown in the United States.

According to Wikipedia, carbogen is a mixture of carbon dioxide and oxygen that was once used in psychotherapy. The principle behind this gas mixture is that it tricks the brain into believing that it is being starved of oxygen, creating a number of effects including hallucinations.

However, despite several unscrupulous websites listing this as a way that people are currently getting high, at the time this article was published there were no actual, credible reports of this supposed trend.

While the effects of smoking catnip are clearly subjective based on the healthy mix of people who say it works and those who claim it does not, the fact of the matter is that seemingly thousands of people try this each year in order to get high. Internet forums are full of countless descriptions of people who have smoked this herb, with mixed results.

However, catnip has been used since ancient times for its sedative properties when ingested, and is of course well-known to elicit a significant response in domestic cats.

Many cough medicines contain ingredients that, when consumed in excess, can produce powerful effects. These include severe visual and auditory hallucinations, but they can also include cardiac arrest and death.

People have been getting high from cough syrup for at least the last century, since in the early part of the 20th century most cough remedies contained morphine or even heroin. Beginning in the 1960’s, a new class of drugs emerged that caused significant hallucinatory effects. One of the most popular of these, Robotussin, eventually became known as “robo-trippin'” among those who used it.

This method of intoxication falls into and out of public favor but is not a widespread practice; partly thanks to better controls and awareness of pharmacy clerks related to abuse of cold medicines. (Some of which can be used to produce the street drug meth)

This plant is used primarily in parts of Africa and the Middle East, although immigrant populations have increasingly imported the habit to their homes in other parts of the world. Khat is a stimulant that produces alertness and mild euphoria when the leaves of this shrub are chewed, but consequently many users develop severe dental and oral health issues from the toxic effect of the plant. (2)

Krokodil is made from over the counter medications that contain codeine, as well as a number of other ingredients that vary depending on the person who is making it and what substances are available to them. Consequently, krokodil can be extremely dangerous.

Users liken krokodil to heroin but indicate that its effects are much shorter acting. But because the precursors are easy to obtain and the drug can be quickly made in any kitchen, severe addictions often develop, coupled with significant health issues resulting from impurities in the drug. For many the results are fatal, and those that survive often have scars and sometimes must have limbs amputated. (3)

A rare type of fungus that grows underground, “philosopher’s stones” cause hallucinations and euphoria that last up to 6 hours or longer. While generally illegal, this subterranean mushroom is nevertheless available on the internet and in some shops in a number of countries that haven’t made it a scheduled substance. In the US and much of Europe the drug is banned. (4)

Popular in the late eighties and early nineties, amyl nitrate is a liquid substance commonly known as “rush” that is inhaled. Often disguised as “VHS Head Cleaner” or “DVD cleaner,” in both cases in small brown vials, rush causes intense euphoria, but only for several minutes or less. The drug at one time was trendy in the homosexual communities, though reports of its use are rare today when compared to most other drugs.

Banned in the US military and three states, this mint plant relative can cause intense hallucinations and associated bizarre behavior. Use of the plant has come under fire recently considering its widespread availability online, although at this time The Partnership at DrugFree.org reports that it is still legal in most of America. (5)

The San Pedro cactus is commonly found in the wild in parts of South America, though the plant has spread to New Mexico, California, Texas and Mexico via demand for it as ornamentation. San Pedro has long-lasting hallucinogenic properties when ingested. Native peoples have used the plant in spiritual and religious ceremonies for at least the last two thousand years; perhaps longer.

San Pedro is often eaten raw although a large amount of it is required in order to achieve the desired effects, which include strong auditory and visual hallucinations, euphoria, loss of identify and other effects that for many users can be quite frightening.

Scopolamine is a drug made from the Borrachero tree and has been featured in a number of sensational news reports recently. Known as “Devil’s Breath,” this drug has been implicated in a number of rapes, robberies and other crimes. However, credibility for many of these stories remains questionable. (6)

Regardless, the drug has been reported as having unpleasant effects that many users do not wish to repeat, so recreational use is not common. The drug has, however, been reported to have been used by various world governments as supposed “truth drugs.”

Soma is a brand name prescription heart medication that some have claimed could lead to abuse. However, the soma of record is a drug that existed at one time – and may still exist today. The problem is that no one really knows what this powerful substance was made from despite countless historical and religious texts that have referred to it. Some reckon the drug is an opiate derivative, while others theorize it could have been made from ephedra or a similar plant. Other potential candidates include mushrooms like Amanita Muscaria – the “Magic Mushroom” of yore, or other hallucinogenic mushrooms.

If soma is any one of the drugs mentioned in the preceding paragraph, then it should be considered an active strange drug of abuse considering that all of the above are still abused today.

If you know of a strange drug that’s not included here, please mention it in the comments.