Addiction in the LGBTQ Community 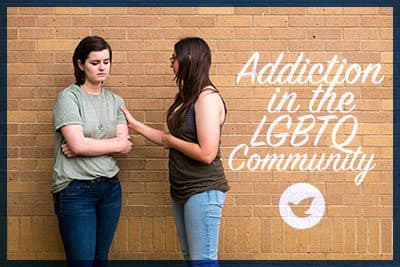 The lesbian, gay, bisexual, transgender, and queer (LGBTQ) Community has received a lot of cultural attention since the AIDS epidemic swept the nation and killed thousands of young gay men in the 1980s. Since then, members of this community have fought for civil rights and won many victories for improved access to healthcare, better treatment on the job, and the right to marry.

However, people who identify as gay, lesbian, bisexual, transgender, queer, and even asexual struggle with higher rates of substance abuse than the general population, often develop these struggles at an earlier age, and continue harmful patterns later in life. This is, in part, due to some aspects of the community itself; however, most of it is tied into struggles with mental health that are associated with depression and anxiety.

Substance Abuse Problems among Those Identifying as a Sexual Minority

The Substance Abuse and Mental Health Services Administration (SAMHSA) reports that around 20-30 percent of sexual minorities, which include members of the LGBTQ community, struggle with substance abuse. While exact numbers are not known, these rates are significantly higher when compared to the rate of substance abuse in the general population, which is 9 percent. LGBTQ adolescents are twice as likely as their peers to try substances and abuse them regularly. Addiction is 2-4 times higher in the LGBTQ community compared to the general population.

A large part of being in the LGBTQ community involves socializing, which too often involves social drug use. Bars, clubs, and circuit parties all involve substance use of at least alcohol and often marijuana, club drugs, poppers, and other substances.

People who identify as gay, bisexual, or transgender are less likely to have access to healthcare – twice as likely as the general population to not have insurance or adequate access to treatment – so substance abuse that turns into addiction is much less likely to get attention as needed. Additionally, daily stress on mental health from social pressure and threats of violence puts people in the LGBTQ community at a greater risk of developing a substance abuse problem to cope with poor mental health.

The Substances Abused by Those in the LGBTQ Community

Among older adults in the LGBTQ community, 10 percent participated in binge drinking, and 12 percent abused drugs that were not prescribed to them. This can lead to serious problems with long-term health, including increasing the risk for cancer, dementia, heart disease, and liver disease.

When seeking substance abuse treatment, members of the LGBTQ community need special attention from facilities, counselors, medical professionals, and case managers to understand the specific discrimination faced by this minority group. Many families still reject children who come out as gay, bisexual, or transgender, and in some cases, these adolescents or young adults are physically and emotionally abused, forced into conversion therapy, or worse. People who are identifiable as members of the LGBTQ community are more likely than the general population to suffer domestic abuse, intimate partner abuse, sexual assault, physical assault, murder, and harassment. To understand the drastically different outlook on life that a person who is gay, bisexual, or transgender may have, a treatment program should specialize in helping these individuals in order to get a complete picture of their mental health, community support, and underlying causes of substance abuse or addiction.

Effects on mental health start in school. The website NoBullying.com found that 82 percent of LGBTQ youth experienced bullying in the prior year specifically targeting their sexual orientation; 64 percent felt unsafe at school because of their sexuality, and 44 percent felt unsafe because of their gender identification. About 44 percent experienced physical harassment, and 22 percent experienced “stronger violence.” Around 32 percent of these students did not attend school at least one day in the year due to feeling unsafe, and 31 percent said their school made no effort to protect them. These statistics are closely linked to rates of substance abuse among LGBTQ adolescents. 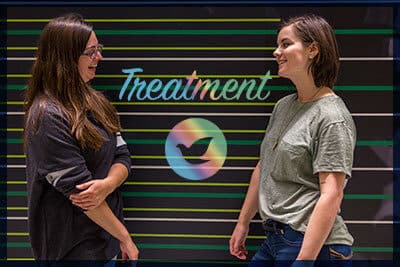 lgbtq
Prefer getting help via text?
We're available 24/7 via text message. Signup below for access to our team when its convenient for you!
and many more...
Start Your RecoveryThe first step toward recovery is always the hardest. We're here to help.